Last week I shared how my oldest son conquered one of his many fears (heights) by staying focused, trusting, and persevering. The experience was a joy to see unfold. But he wasn’t done. The very next day, he sought out an extreme roller coaster to overcome. There were other options for the day: museum, aquarium, the zoo. But he chose the amusement park. The same amusement park we had been to the previous year, and it did not turn out to be so amusing. Not only was he afraid of the roller coasters, but also we found out he had pretty severe motion sickness. Most of the day was spent watching his dad and younger brother ride the big rides, although some were too scary for him to even watch. I was positive we would never be back.

But now it was a full year later. Bolstered by his mountaintop experience the day before and armed with motion sickness medication in his stomach and determination in his heart, we headed back to the amusement park. As we walked in, he informed us he wanted to try the ‘Red Coaster’. I thought, Oh my. You mean the one where you HANG as it flings you upside down and sideways over and over again? I’m pretty sure it’s called the MIND ERASER for a reason. But aloud, I just said, “Are you SURE?” Yes. Then my husband asked him, too, “Are you sure, buddy?” Memories of our miserable, sobbing child the previous year were replaying in our minds. We must’ve asked a dozen more times to be sure. He kept saying yes. Clearly WE weren’t sure. But that didn’t matter because he was.

Waiting in line, he announced, “I think this will help me conquer my fear of roller coasters.” I sure hoped so, otherwise this might be our last amusement park visit as a family.

He picked his dad to be his roller-coaster-fear-conquering-partner, so I sat with my youngest son in the row in front of them. As soon as the coaster started pittering up the hill, I heard the crying behind me. I thought, Oh, no. This is going to be bad. Why did we let him do this? I knew he wasn’t ready. Well, it’s too late; we can’t get off. I heard my husband trying to calm him down, offering his hand to hold for support. That 100-ft climb took FOR. EVER. I was so sad for my boy who was out of reach, struggling to hold it together. Finally, the coaster loosed us to fly. And fly we did. Here’s an excerpt of the ride description to try to wrap your ‘mind’ around:

“Right away you will plummet down a merciless 90-foot curve. Next is the heartline loop — a startling inversion in the shape of a heart. Your brain and stomach will scramble as you flip head over heels, twice, in two seconds, at a pulse-pounding 50 miles per hour. Save some room in your heart for all those extra G’s you’ll be taking.

At a loss for words yet? How would you describe the sensation of flying through a half loop and a half corkscrew and pulsing out at a nearly vertical angle? We call it a “sidewinder.” But don’t worry your poor brain with that, because you’ll need all your focus to get through a seemingly endless pair of 360 degree rolls.” 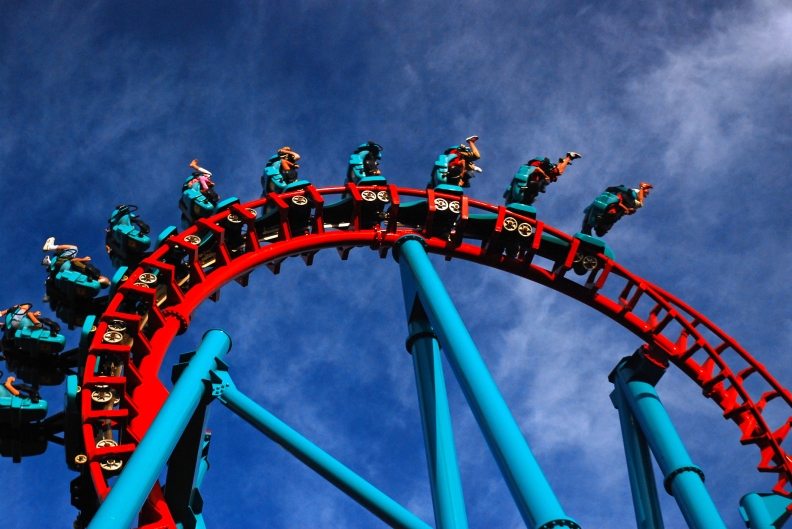 All I heard was a cacophony of screaming (my own included), so I wasn’t sure if my oldest was surviving this or not. After 90 seconds of Mind-Erasing thrills, we came to a stop. I expected my son to be shell-shocked, instead I was the one shocked. The tears were gone, and he was beaming with victory. He loved it.

We were curious if he was screaming during the ride, so my husband asked, “Did you scream?” He replied matter-of-factly, “Yeah. It helped.” We were all so proud of him. Walking down the exit ramp, he announced he wanted to ride it again. AGAIN?! Wasn’t surviving it enough? Not for this little conqueror! Thanks to the fact it was the first week of school for everyone else, the lines were short. All in all that day, we rode the Mind Eraser five times. My son didn’t just conquer his fear of extreme roller coasters, he ‘more than conquered’ it.

It made me think of this gem in Scripture:

“Who shall separate us from the love of Christ? Shall tribulation, or distress, or persecution, or famine, or nakedness, or danger, or sword? As it is written,

‘For your sake we are being killed all the day long;

we are regarded as sheep to be slaughtered.’

No, in all these things we are MORE THAN CONQUERORS through him who loved us. For I am SURE that neither death nor life, nor angels nor rulers, nor things present nor things to come, nor powers, nor height nor depth, nor anything else in all creation, will be able to separate us from the love of God in Christ Jesus our Lord.” Romans 8:35-38 (emphasis added)

“More than conquerors” here is just one word in Greek – hupernikaó (hoop-er-nik-ah’-o). It’s a verb and it means: to prevail mightily, exceedingly conquer; i.e.  “super-conqueror” who is “completely and overwhelmingly victorious”. Yes!

Abundant life is ours for the taking if we let God’s perfect love cast out our fears.